On 3/21 at approx 7:00 pm, officers responded to the 2100 block of Injo Drive for a report of a subject with a weapon.   Officers were able to make contact with the suspect, 39 year old Lake Havasu City resident Dylan Eckland.   During the investigation, it was determined that Eckland was in a verbal argument with several occupants of the residence and pointed a handgun at one of the victims.  Eckland was charged with aggravated assault, threats, disorderly conduct with a weapon, possession of mariujuana, possession of drug paraphernalia and misconduct involving a weapon. 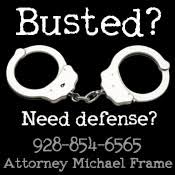